The most economical way to travel to the DPRK is the train Dandong-Pyongyang-Dandong. Dandong is the largest Chinese border city, facing Sinuiju, North Korea across the Yalu River, which demarcates the Sino-Korean border. To the southwest of the city, the river flows into Korea Bay. Many travelers come to Dandong for its vicinity to the North Korean border. This city is North Korea's gateway to the world - a place where the long alliance between China and Korea takes physical form.

Taking the train from China to North Korea is a special experience. It will give you an opportunity to mingle and chat to North Koreans. Koreans are very friendly and hospitable and usually happy to share a drink or two with foreign tourists. Each traveller is given a comfy berth to sleep on within a shared compartment of six beds (hard-sleeper). Hot water for tea or noodles is usually available on the carriage. Toilets are maintained in reasonable conditions and are regularly cleaned by the train attendants.

Ride on the train

Pyongyang Railway Station, At the platform

How to get to and out of Dandong (China) 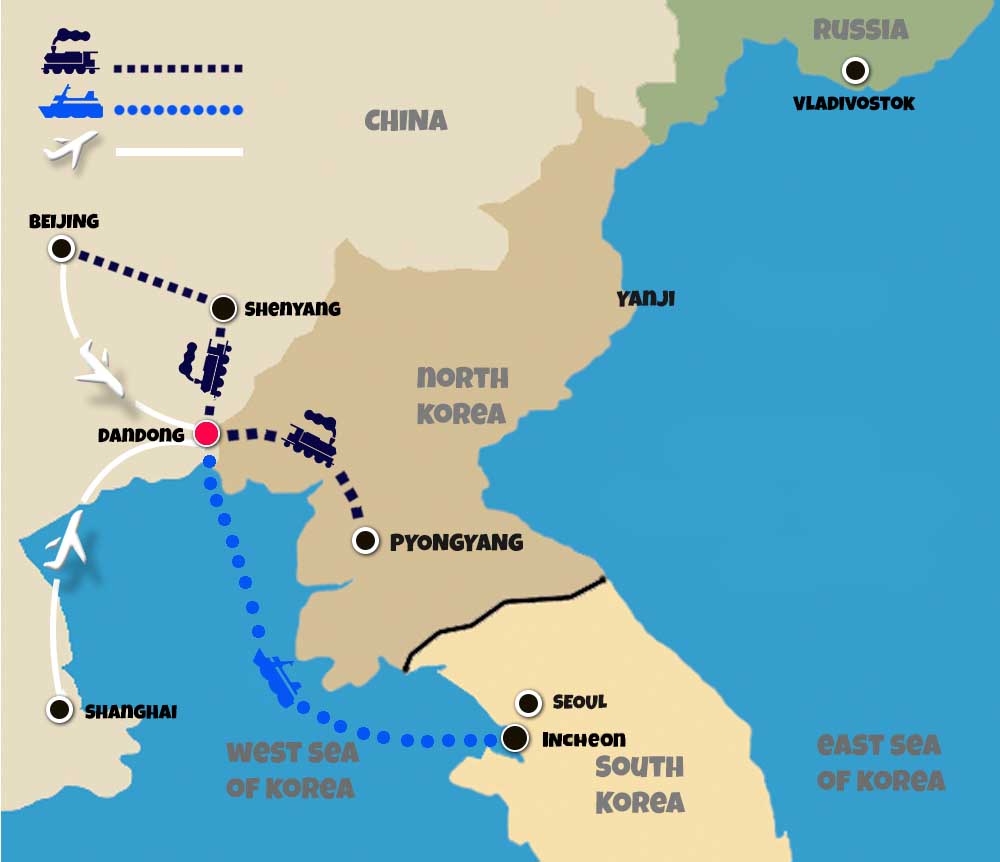 By plane: A small airport (IATA: DDG) is located just outside Dandong. Daily flights are available from Beijing, with several flights a week from Shanghai, Shenzhen and Qingdao.

By train: There are several direct daily trains (both high speed "G" and regular "K") from Beijing. In September 2015 a new high speed train route was opened between Shenyang and Dandong.

By bus: There is a long-distance bus station which is conveniently located near the Dandong train station. The bus service is available:

By boat: A ferry between Dandong and Incheon port (South Korea) leaves Incheon's Ferry Terminal No. 1 at 5 pm on Monday, Wednesday, and Friday and leaves Dandong at 3 pm on Tuesday, Thursday, and Saturday. The passage takes 15 hours